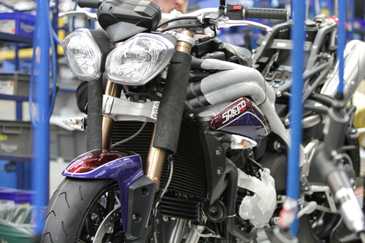 Comedy legend and avid motorcycle fan Ross Noble is embarking on a unique tour this month, asking bike fans and Twitter followers to guide him on a trip to find the best of biking Britain. On the week-long â€˜Sit Down Tourâ€™ (May 24-30), Ross will take in England, Scotland and Wales on board Triumphâ€™s 500,000th bike, a uniquely liveried Speed Triple. As well as marking the significant milestone of the half-millionth bike to roll off Triumphâ€™s production line since 1990, the tour is also a celebration of Ross Nobleâ€™s 20 years on the stand-up comedy circuit and an opportunity for him to recharge his creative batteries while indulging his passion for motorbikes.

Riding the Speed Triple, Ross will be travelling around the UK, guided only by fans via Twitter, to uncover some of Britainâ€™s best biking routes. A few stops are already planned, such as visits to two brand new Triumph stores – Bulldog Triumph in Winnersh, Berkshire and Philip Youles Triumph in Manchester – while others will be entirely shaped by daily tweets to unearth the great places and characters along the way. Carrying VIN number 500,000 and sporting a one-off red, white and blue paint scheme, created using a brand new production technique, Rossâ€™s Speed Triple is destined to become a collectorâ€™s item.

After the Sit Down Tour is over, Ross will take the Speed Triple to the Goodwood Festival of Speed on July 1, where it will be auctioned with all monies raised going to the charity, Riders for Health. The charity has been championed previously by Ross Noble and provides vital motorbike transport for medics to reach otherwise inaccessible parts of rural Africa.

Commenting on the Sit Down Tour, Guy Masters, general manager of Triumph UK, said: “Reaching the 500,000th bike in just twenty years is a terrific achievement and a credit to the hard work of everyone at Triumph and our dealer partners globally. To mark the occasion and also to celebrate our British roots, we wanted to do something that gave our customers a chance to get involved. We were delighted when Ross agreed to help us mark the milestone with his Sit Down Tour, which will involve dealers, riders and fans across the UK.”

The Sit Down Tour leaves Triumphâ€™s Hinckley factory on Tuesday May 24 and finishes in Rossâ€™s home town of Newcastle, at Triumph North East, Dinsdale Place, NE2 1BD, on Bank Holiday Monday, May 30.

Read more and add your comments in the forum

This entry was posted in All Things Triumph and tagged Speed Triple, Triumph Motorcycles, Triumph News. Bookmark the permalink.